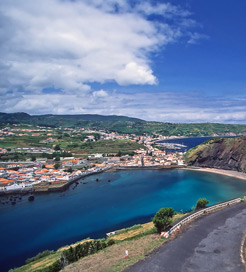 How to book ferries from Terceira to Faial

There is currently just the 1 ferry route running between Terceira and Faial operated by 1 ferry company – Atlanticoline. The Praia da Vitoria to Horta ferry crossing operates weekly with a scheduled sailing duration from about 8 hours 55 minutes.

Whilst we’ve taken great care to ensure the information on this page is correct, as the frequency and duration of crossings on all routes can vary from time to time we’d advise that you get a live quote for current availability on this Terceira Faial crossing between Praia da Vitoria and Horta.

Ferries from Terceira to Faial

Faial is one of the Central Islands in the heart of the Portuguese archipelago, the Azores, in the North Atlantic.

‘The Blue Island’ is the third most populous in the Azores, so named for the long rows of hydrangea and blue and white housing. However, it’s colourful not only in landscape, but also in culture, with the principal settlement of Horta offering lively bars, a quirky marina and the fascinating Scrimshaw Museum featuring a comprehensive collection of maritime artefacts. For outdoorsy types, a hike to the Monte da Guia crater and the Whaler’s Chapel affords sublime views over the island and neighbouring Pico, while the surrounding blue ocean offers some of the best diving and whale-watching spots in Europe.

Ferries sail to Horta on the southeast coast of Faial from almost every other island in the Azores, except the tiny island of Corvo in the northwest corner of the archipelago, making ferry travel one of the easiest ways to get around.