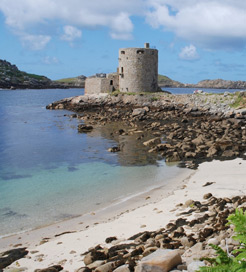 How to book ferries from Isles of Scilly to England

There is currently just the 1 ferry route running between Isles of Scilly and England operated by 1 ferry company – Isles Of Scilly Travel. The St Mary's to Penzance ferry crossing operates weekly with a scheduled sailing duration from about 2 hours 45 minutes.

Whilst we’ve taken great care to ensure the information on this page is correct, as the frequency and duration of crossings on all routes can vary from time to time we’d advise that you get a live quote for current availability on this Isles of Scilly England crossing between St Mary's and Penzance.

Ferries from Isles of Scilly to England

About Isles of Scilly:

The Isles of Scilly are an archipelago 28 miles southwest from the Cornish peninsula in Great Britain.

Their white sandy shores and famed peaceful atmosphere attract those looking for an escape from modern day stresses. Of the 5 inhabited islands, St Mary’s and Tresco are the largest and most popular, whilst the islands of Bryher, St Martin’s and St Agnes are home to a handful of locals.

Boasting some of the finest beaches in the UK, the Isles of Scilly are a top water sports destination, too, with playful seals commonly found nearby as well. After a day of fun by the seaside, take your pick from the wide range of luxury cottages and upmarket hotels, or you can choose to sleep under the stars in one of the many excellent campsites.

The Isles of Scilly are a popular holiday spot, particularly during summer, so it’s easy to get back to mainland England with numerous crossings on offer from the island of St Mary’s to Penzance, Cornwall.