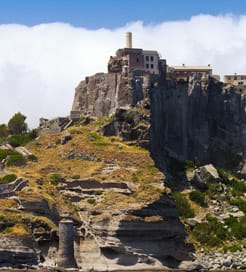 Capraia is the north-westernmost of the seven islands of the Tuscan Archipelago, the third largest after Elba and Giglio, with a population of roughly only 400 people.

Capraia is about 40 miles from the city of Livorno by sea and can be reached by ferry on a daily basis. Ferries dock at Porto di Capraia, the island’s only port, connected to the village by the only asphalted road you’ll find on the island.

The rest of the island is connected not by road, but by pathways and taxi boat services. You can also join a tour group of six to twelve people, which is a great way to see the island’s scenic coastline and hidden beaches. These tours start in the morning, at noon, in the early afternoon and at the end of the day, normally lasting from two to four hours.

As well as being famous for its wine, anchovies and natural beauty there are also quite a few other attractions worth taking a look at while you’re there. One of the island’s most popular walks takes you through the ruined buildings and agricultural complexes that were part of the Capraia’s penal colony in times gone by. Other walks will take you past the ancient ruined church of Santo Stefano, not far from the La Piana vineyards.

Capraia Island’s village is overseen by the Fortress of St. George, although sadly this is under private ownership and is not open to tourists.

Routes and Ports in Capraia Island