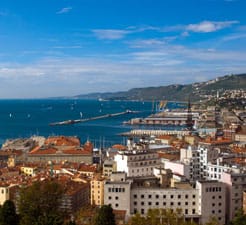 How to book a Ferry to Trieste

Use Direct Ferries to compare and book your Ferry to Trieste in Italy to get the best deal.

Using our fare search you can check timetables, live prices and availability for Ferries to Trieste, or compare your destination with alternative ports, not just in Italy, but further afield too.

It really is simple to save on your ferry to Trieste with directferries.com. All you have to do is select your place of departure, ferry route, number of people travelling on the ferry to Trieste and hit the search button.