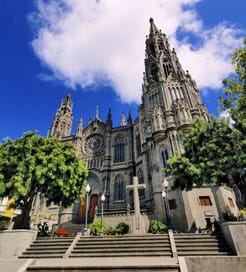 How to book ferries from Spain to Gran Canaria

As the frequency and duration of crossings on some routes varies we would advise that you do a live search for crossings from Spain to Gran Canaria to get the most up to date information.

Ferries from Spain to Gran Canaria

Gran Canaria is the second most populous island in the Canary Islands, a Spanish archipelago in the Atlantic Ocean.

A ‘continent in miniature’, Gran Canaria is locally known. This is due to the huge variety of landscapes and micro-climates, with vast mountains, long beaches and green ravines all coming together on this 1,500 square-kilometre landmass.

A third of Gran Canaria is classified as a UNESCO Biosphere Reserve, but elsewhere, you will find a rich history in the cosmopolitan capital of Las Palmas, a charming hilltop village in Tejeda and a network of superb cycling routes winding through the valleys.

Travelling by ferry is a convenient way to explore the Canaries, and, given Gran Canaria’s central location, it’s within easy reach from nearly every other island. There are also some long-distance connections from mainland Spain which are operated by a couple of excellent ferry companies.