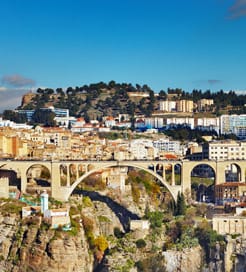 How to book ferries from Spain to Algeria

As the frequency and duration of crossings on some routes varies we would advise that you do a live search for crossings from Spain to Algeria to get the most up to date information.

Ferries from Spain to Algeria

With the longest borders on the continent and a 1,644 kilometre coastline facing the Mediterranean Sea, Algeria is one of Africa’s greatest gems.

The country is best known, however, for its magnificent Sahara region, with over four-fifths of its 2,381,741 square-kilometre landmass draped in desert. Also, characteristic of most North African nations, Algeria is filled with ancient ruins dating all the way back to Roman and Byzantine eras, the most famous being the town of Timgad, close to Batna.

Beautiful cities come in abundance, too. The capital, Algiers is defined by French colonial buildings, Annaba boasts breath-taking basilicas next to turquoise waters and, as the oldest city in the county, Constantine offers historical wonders around every corner.

With several ports along the Mediterranean coast, Algeria and southern Europe are well linked by ferry. Countries like Spain, France and Italy all offer regular crossings, operated by a wide selection of ferry companies.