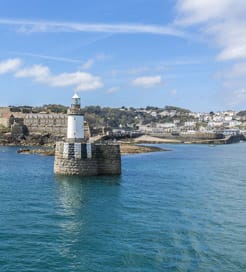 How to book ferries from Guernsey to France

There is currently just the 1 ferry route running between Guernsey and France operated by 1 ferry company – Condor Ferries. The Guernsey to St Malo ferry crossing operates weekly with a scheduled sailing duration from about 1 hour 55 minutes.

Whilst we’ve taken great care to ensure the information on this page is correct, as the frequency and duration of crossings on all routes can vary from time to time we’d advise that you get a live quote for current availability on this Guernsey France crossing between Guernsey and St Malo.

Ferries from Guernsey to France

The Island of Guernsey is located in the English Channel and forms the Bailiwick of Guernsey with the islands of Alderney and Sark as well as a few other smaller islands.

Situated in the Channel Islands, Guernsey enjoys more hours of sunshine compared to the UK. Its milder climate allows islanders to make the most out of outdoors activities, from its beautiful beaches and cliff paths to island-hopping to some nearby islands.