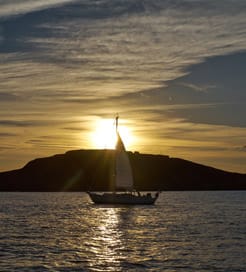 How to book ferries from France to Alderney

There is currently just the 1 ferry route running between France and Alderney operated by 1 ferry company – Manche Iles Express. The Dielette to Alderney ferry crossing operates weekly with a scheduled sailing duration from about 55 minutes.

Whilst we’ve taken great care to ensure the information on this page is correct, as the frequency and duration of crossings on all routes can vary from time to time we’d advise that you get a live quote for current availability on this France Alderney crossing between Dielette and Alderney.

Ferries from France to Alderney

Alderney is the northernmost inhabited Channel Island, part of the Bailiwick of Guernsey in the English Channel, just eight miles from the coast of France.

‘The Forgotten Jewel in the Channel’ is just that: an isolated, peaceful escape with gentle landscapes, a mild climate and some of the most immaculate beaches of the archipelago. A haven for wildlife, the island is popular with birdwatchers and botanists, with over a thousand species of wildflower flourishing in the fields.

Becoming an island when the waters rose during the Neolithic period, Alderney is also steeped in history, having been inhabited for five thousand years. It’s strategically located between Britain and France, culminating in numerous monuments and forts still visible today, spanning from Ancient Rome to World War II, when the Nazis invaded.

Given Alderney’s close proximity to France, getting the ferry from the Normandy coast is quick and reliable, with weekly crossings lasting just under an hour.